This weekend saw more messing about with ink, but this time I made my own.  I went for a red first from a 16th century recipe, then a 13th century black.  (I am waiting for seeds before I try green ink, and I have yet to set up some verdigris production, which means I won’t have any blue for quite a while)  I will have some much more in depth documentation on the whole ink making process soon enough, this post is by way of a more general description.    I’m not terribly impressed with the ipad taken photos in this post, but they’ll have to do now. 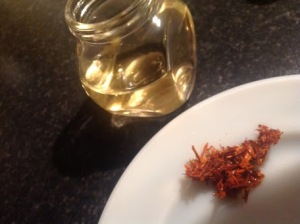 The red ink was made with brazilwood chips, the wood used to make violins apparently.  It has a distinctive smell, not really unpleasant but not wonderful either.  I had to soak the chips in white wine overnight (photo is for illustrative purposes only, not a reflection of quantity!  I used 3/4 bottle of white wine that had gone undrunk for too long, it seemed better than pouring it down the sink)

The next day I boiled the chips and wine (lots of ventilation was of course employed in the making of all inks) Art found the instruction “set it on fire and let it seeth til it be halfe consumed” very funny.  There had been some prior consternation when I realised I had no idea what a pennyworth of alum was, but from comparing with other red ink recipes we decided that an ounce of alum and gum arabic seemed reasonable.  Brazilwood chips and alum are also used to dye wool and cloth, so I will be doing more with those when I have some bigger pots to declare for use for dying/ink purposes only.

I said I made the black ink to a 13th century recipe, but in truth the recipe, with slight variations, was common throughout the middle ages, I just chose a specific instance for convenience.  The recipe is a type of Irongall ink, one of the two black inks popular at the time.  The other variety, carbon ink (using lamp black or charcoal with gum),  is said not to last so well, and to be honest just didn’t seem as much fun.   The basics of Irongall Ink are galls, Vitriol (also called copperas), gum arabic and rainwater. 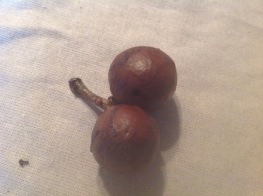 It was the galls (or oak apples as I’ve always known them)  that made me choose this variety of ink to try, I’ve always been fascinated by them.  They’re caused when a gall wasp egg is laid in a developing leaf bud, and the resulting larva tinkers with some chemicals and the oak and the larva produce the gall on which it feeds. When the larva is ready for adult life it burrows out of a small hole, leaving the gall on the tree.  These would have been pretty plentiful in days when the country was covered in oak forests, but not so easy to find nowadays.  A few days hunting – most memorably with Gytha and her two – produced a mere handful.  I was kind of sorry to bash them up.  The science bit is that these powdered galls boiled up in rainwater (til reduced by half) create a tannic acid.  Apparently pomegranate skins are good for this too.  I was half itching to try tea.  The resulting liquid was supposed to be a sort of brownish colour, I would say mine was a a blackish brown, but I could see how it would fade to brown.  (This will also dye wool a sort of beige/caramel colour)

When you add ferrous sulphate (the wonderfully named Vitriol or copperas) that’s when you get the black or blue black colour people describe. (I personally think it’s more purple black)  My recipe asked me to mix the dose with warmed wine.  I can see why this ink is a bit destructive on paper and pens, with all this acid.   The result of mixing the galls and vitriol is a ferrotannic acid.   Ferrous Sulphate is lovely to look at, I really like the colour.  The boiling mixture had a very definite iron tang I wasn’t quite so keen on.   Gum arabic (liquid form for me, I didn’t have any crystal form) is added to bind the whole lot and suspend the pigment in something smooth flowing.

All mixed in, it was time to let it cool, then strain it through muslin into a wide glass jar.   I tested a few splashes on a page and was worried I hadn’t reduced it all enough, but exposure to air soon blackened it satisfactorily.   I’m told I now have to store it for a few days, stirring it with a stick 4 times a day.    I couldn’t wait that long I had to try out the inks and see how they worked.

One of my other projects is to hunt down some material for bardic pursuits, so I kept a note of a tweet by Erik Kwakkel ‏ @erik_kwakkel (profile from twitter: “Medieval book historian at Leiden University directing a project on the 12th-century. I tweet about the wonderful world of the medieval book. Lots of images.” – I love his tweets.)  The tweet read: 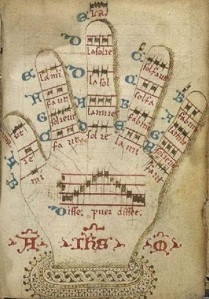 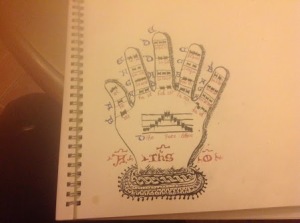 I decided to have a go at recreating it to see how my inks worked out (I had to use commercial ink for the blue)   I discovered that it’s very hard to get paler shades of black, I may have drawn the crosshatching to be subtle and light but oxidization made it strong and black to spite me.

Of course now I have to go and find out how this notation works and to see how many letters I got wrong while blindly copying.  I will say that it’s oddly comforting to copy something where their positioning and script isn’t pristine and perfect 🙂

But back to the ink, I find I like it, it’s smooth flowing and I get a kick out of watching the purple-grey text blacken even as I look at it.  I think maybe the red could have been reduced some more, but it’s also fine to work with.  I wonder how long it will be before it starts to eat through the paper…