What could possibly go wrong, right? I did my research, harvested some rain water and had some other water types as well so as to adjust the mix as required. I sourced and bought some microscales to be *really* accurate with the mordant stage and preparing the dyebath, it was all going to be fiiine. The dye bath stage was promising, there was definitely purple in there 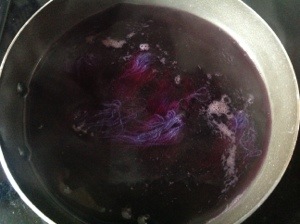 It was a pinky purple as I pulled it out, but then, bang, everything went navy. It’s a pleasant navy, if I’m being fair about it, but not what I was hoping for. I was prepared, I had some extra silk skeins of my own, so I wasn’t too worried. I adjusted, changed the water source, second attempt was definitely a lovely purple until again it hit the air … Navy again. I wondered had Art been in a “helpfull” mood and been adding dyestuffs together when I wasn’t looking, so I ordered some new logwood and some alkanet to be on the safe side and then forgot about it all for a while.

Next time I was painstakingly precise with my percent of weight of fibre measurements and tried the new logwood. Navy. Put some wool in just to see.. Purple. Huh.

Bought myself a new little dyepot and set some carefully weighed alkanet to soak in gin for a week, as alkanet is not fantastically soluable -I only needed a small bit for silk skeins and after the week I diluted it in water for the dyeing process.

I was pretty optimistic about this batch, the colour, I thought, looked good in the jar, but the thread turned a sort of hint-of-lilac grey instead. Getting a little bit desperate I decided to add a small touch of logwood and a couple of splinters of brazil wood into the alkanet dyebath and noticed it was definitely heading into better purple territory, even when exposed to air. I hadn’t tried over-dyeing the navy as I reckoned the navy colour was too strong, but the previous batch of logwood navy I had tried had annoyed me so much I was prepared to sacrifice them to see what would happen if I overdyed them in a brazil wood bath. The results surprised me, clearly I was expecting the experience to be more like mixing poster paints as a child, where everything becomes a muddy mess. I got purple, a bright purple even though the thread had started a dark navy. The photo here doesn’t do the colour justice, and the thread itself is still damp and uneven looking as a result. 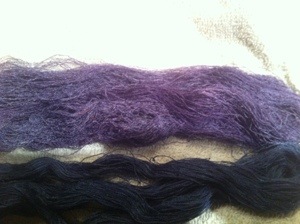