There have been a few adventures recently, in glass bead making and teaching, in lichen dye research and in my top secret project that I’m trying to get finished for first weekend in September.   The one I can blog about most easily right now is my foray into basketweaving, because I have a bunch of photos just sitting on my phone ready to go.

One serious advantage I’ve gained from the illumination research I do to create scrolls is that I have unconsciously picked up a lot of evidence of certain things.  My first thought when I sought to find evidence of the medieval use of baskets was that it would probably be very difficult as baskets aren’t renowned for their durability over centuries.  Then the stream of memories of baskets spotted in illuminations, like those on many pages in 15th century Tacuinum Sanitatis (BNF Latin 9333) holding vegetables or the baskets poised ready for the swept up letters in the border of f135 in The Hours of Margaret of Orleans (BNF Lat. 1156 B)(One of my absolute favourite manuscripts)

That’s just two very fast examples, because they’re everywhere, I’ve just taken them for granted in the background because who can imagine a life without baskets?  My basket turned out a bit like the basket in the gathering beans image above, so I’m pretty content I have added some basic groundwork to my growing list of medieval appropriate skills-in-training.

Oh and I (properly) learned what a bodkin is, and that’s a word I’ve always considered quintessentially medieval. 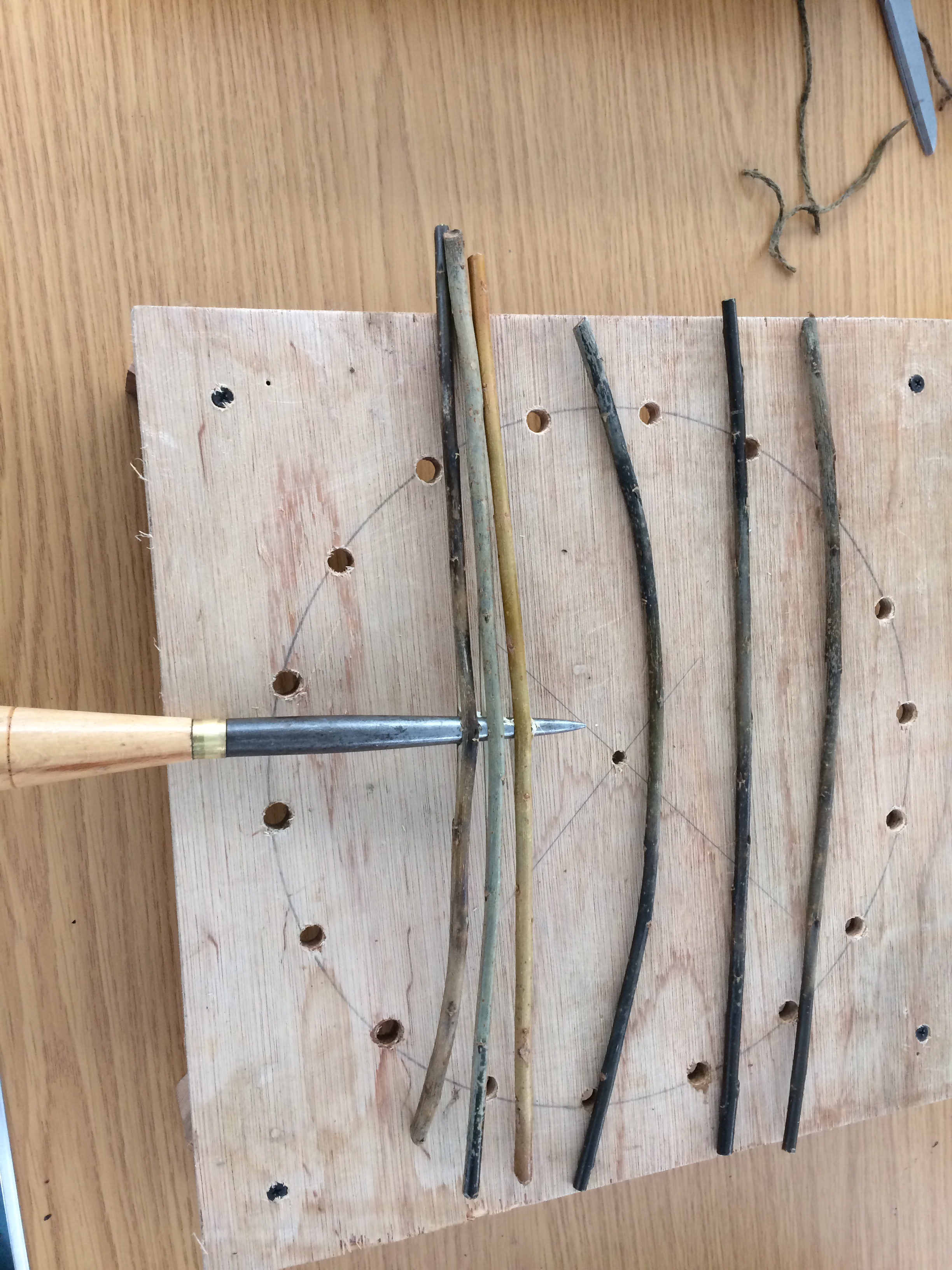 And this would be one.  Ignore the board with the holes in it, we used it to pierce the willow on, and then put them away, but it does give you an idea of where the uprights should end up if you manage to get your set up and bit more even than I did! You pierce 3 of the base sticks and then thread in the non-split sticks through the centre  of the split sticks to form a cross.  Then we wandered over to pick out nice thin weavers for the next step. 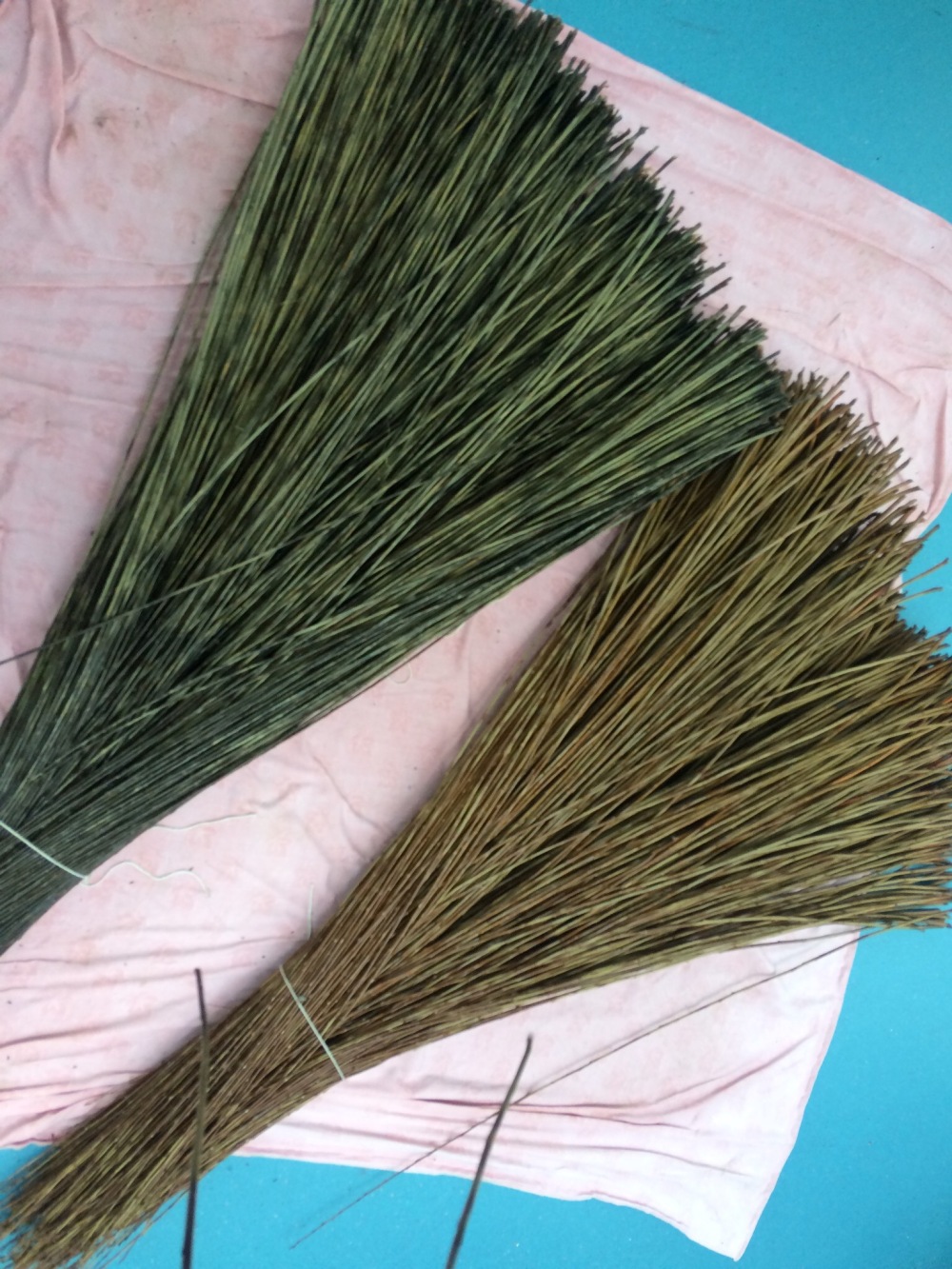 I was really fascinated with the colour differences in the willow, apparently it’s even more pronounced when fresh.  In this photo they all seem to be uniformly the dark or brown colour, but each one was it’s own distinct hue.  Ours had been harvested previously and then soaked for nearly a week (apparently it’s recommended to soak willow for a day per foot of each weaver or rod) They had a very strong and distinctive smell, not unpleasant, vaguely sweet and medicinal, in fact I can still smell it in the room where my finished basket is sitting, though it is fading fast now.

We started with the two thinnest rods, or weavers, that we had, inserting the tips into the split and working around the cross shape, then we had to splay out the base stakes or spokes as evenly as we could. This is definitely one of those things that practice makes you more aware of, and therefore easier.  When it came to adding what becomes the uprights – the staking part – I could see the uneven distribution.

You also start to get a feel for the way the willow wants to curve, which is important for adding in the stakes  – you need to “slype” them (cut an angled tip) to help ease them into the base, either side the spokes.  The base is concave and you need to face it down to add in the stakes – this picture was taken after I did it, so it’s curving the wrong way as an illustration of the process at this stage, sorry about that!

Each stake needs to be persuaded, with the tip of the bodkin, to bend without snapping into an upright. 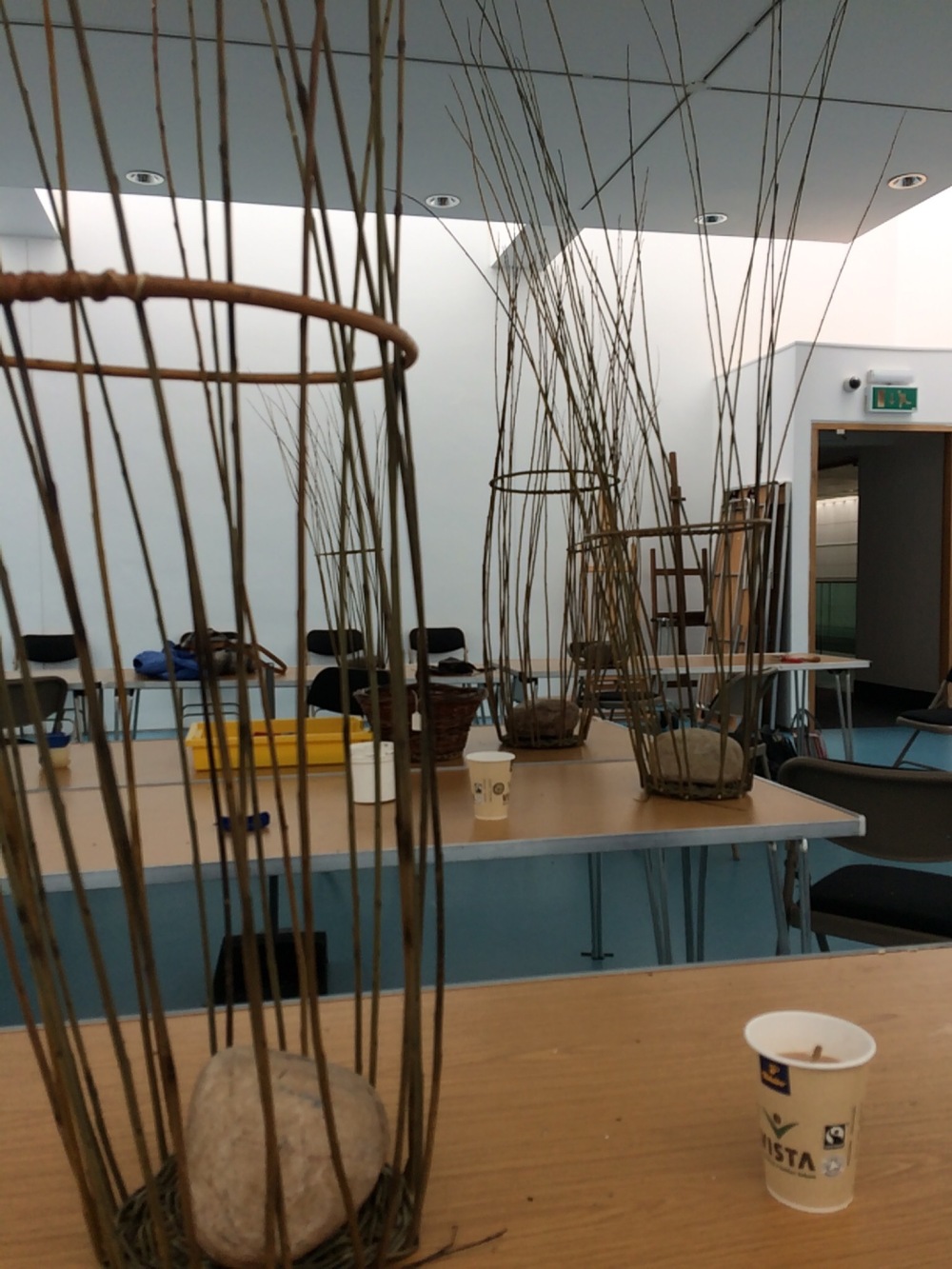 A loop keeps them up out of the way and a rock stops everything crashing over on you as you work and start the “waling” (I learned a 3 rod waling) to establish the base of the basket into the walls. 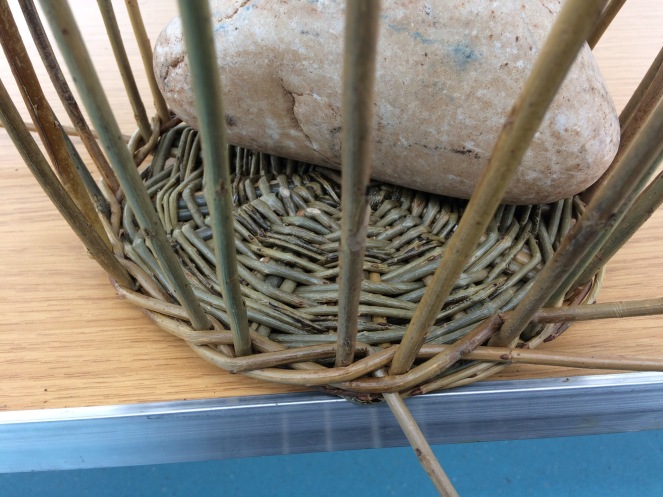 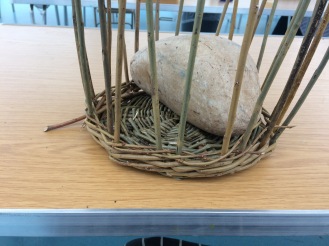 It takes a bit of getting used to, to get a nice curve without a kink and to remember the sequence, to remember the tip to tip and butt to butt joins for adding in the new weavers and my hands have lately gotten lazy,  so my fingers ached a little bit ’til they got a rhythm going.   (Just as well willow bark helps with that, right?)  It’s very satisfying though.  Again practice would mean that I would pay more attention to the even spacing  of my uprights next time.

I was messing about a bit with the two different shades. What you can’t see very well in this picture for some reason is that there is a very distinct pattern that starts to show with the method I was using, a sort of raised step.   Took another one to show what I mean: 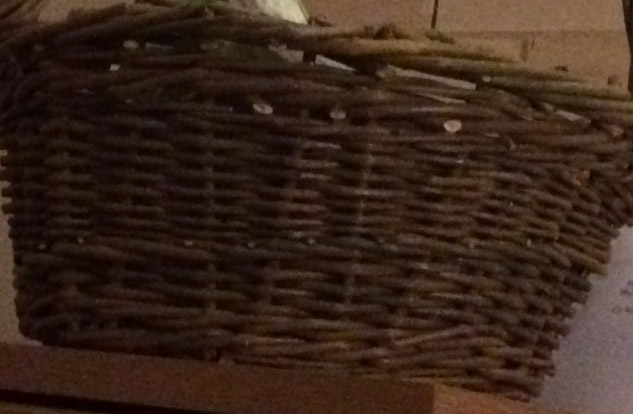 Every few lines you get to bash it all down with something heavy enough, that’s quite therapeutic! It’s getting late and my eyelids feel like sandpaper so I may finish this another time.  But yes, basket weaving, it’s fun, you should try it! 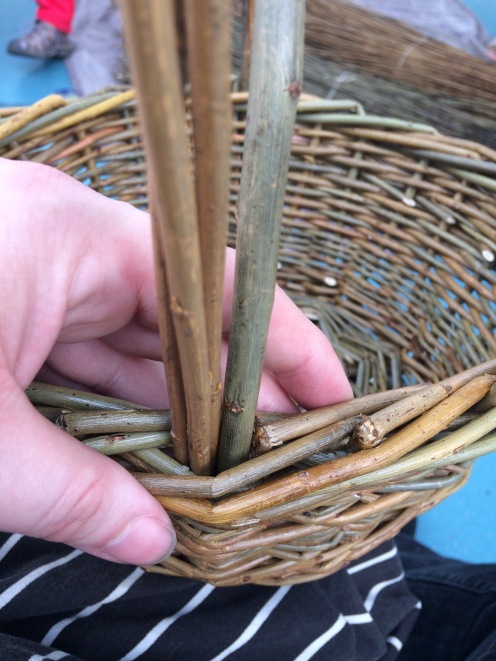 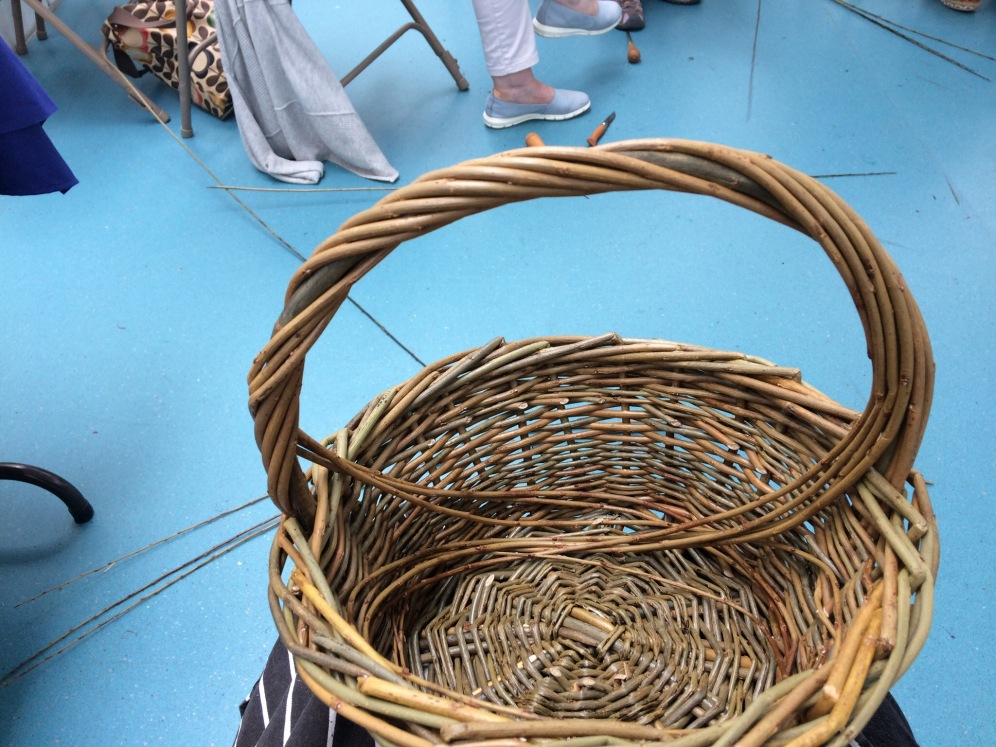