I’ve mentioned before, I think, that as a kid I had known oak galls as oak apples.  Turns out I was partially right.  They’re one type of oak gall and not even the one I was associating with the name.  I’ve been doing a little research into my favourite ink making ingredient (as every good scribal student should)

First, I live in Ireland, so I’ll be talking about the oak galls common here, the ones I find in what I have come to refer to as “my” oak trees.   Two species of oak are commonly found here, the Sessile Oak (Quercus petraea) and the Pedunculate Oak (Quercus robur).
The Sessile oak, native to Ireland, is the most common of the two and is the oak meant when people speak of the oaks that once thrived here in ancient oak forests.  Sessile oaks grow in poor acidic soils and are most commonly located in hilly regions, so you get really fine examples in Wicklow, Donegal and Kerry, our more mountainous counties.   The Pedunculate oak (Quercus robur) is more common here in the midlands of Ireland.  Charleville castle in Tullamore is home to a famous Pedunculate ‘King Oak’, which is said to be between 400-900 years old.  There are a few really cool, properly venerable oaks with low branches my kids have grown up playing around in Charleville, Gytha’s kids too.

You can tell these two oak types apart by the way the Sessile’s acorns have no stalks, but the Pedunculate’s acorns are suspended on long stalks. This year was an incredible year for acorns, I don’t think I’ve ever seen anything like it.   We had a huge storm here some weeks ago, Ophelia, and the next day the road was like someone was trying to make a leaf and acorn stew.

In Ireland and Britain there are more than 30 species of gall wasp, including Andricus, Neuroterus, Biorhiza and Cynips species.  The galls are produced at the larval stage, the  larvae secrete chemicals that cause the formation of galls – this happens usually between
March-October, depending on gall type. There are two distinct generations of gall wasp each year.  One generation produces male and female, the next asexual generation produces females only.

The gall that is correctly referred to as an Oak apple is produced by the Biorhiza pallida, which lays its eggs inside the leaf buds in spring giving a softer, squidger growth.  These can house many larvae instead of just one and will deteriorate quite quickly.  and the plant tissues swell as the larvae of the gall wasp develop inside.  These galls are brownish white, tinged with pink. This particular species produces galls on the branches in one season and on the the roots for the other.

The galls I have been familiar with since childhood are produced, I believe,  by the oak marble gall wasp Andricus kollari.  This wasp causes causes hard, woody marble shaped galls on the stems. Initially green, they lighter to a greenish beige and then darken to  brown and can persist on the branches for several years. The younger they are the better ink I find they produce.  The females leave these galls in August each year but the gall itself can stay on the tree for ages afterwards.  I’m starting  to read some interesting things about these being introduced rather than native gall wasps, as they require two different species of oak, one for the asexual female only generation and one for the male and female generation. The other species of oak is the Quercus cerris, or the Turkey oak native to south-eastern Europe and Asia Minor, which was introduced to Britain around 1735 as an ornamental garden addtion.   I want to do some more research on this and it would make a difference if I try to reproduce ink as it might have been made in period in Ireland.  Here’s how oak galls are described in an old medical text, A History of the Materia Medica, by John Hill, M.D., published in 1751:

***Galls or galnuts are a kind of preternatural and accidental tumours, produced by the Punctures of Insects on the Oaks of several Species; but those of the oak only are used in medicine. We have two kinds, the Oriental and the European galls: the Oriental are brought from Aleppo, of the bigness of a large nutmeg, with tubercles on their surface, of a very firm and solid texture, and a disagreeable, acerb, and astringent taste. The European galls are of the same size, with perfectly smooth surfaces: they are light, often spongy, and cavernous within, and always of a lax texture. ….. It has been observed, that the oak does not produce galls in cold countries: but this observation should be confined to the medicinal galls; for all those excrescences which we find on this tree in our own woods, and call oak-apples, oak-grapes, and oak-cones, are true and genuine galls, though less firm in their texture. The true reason of the hard ones not being produced with us, seems to be that we want the peculiar species of insect to which they owe their origin, which is a fly of the ichneumon kind, only found in hot countries. The species of fly that occasions, by its punctures, the soft galls of France and Italy, is different both from the Syrian one and from ours, though still of the ichneumon kind; and we find the several kinds, which occasion the different galls in our own kingdom, produce different kinds, and those of different degrees of hardness, on the same tree.

I’ve always read that Aleppo galls were the best, that galls on native trees were must less rich in tannic acid.  so now I’m on a mission to rate gall varieties.. 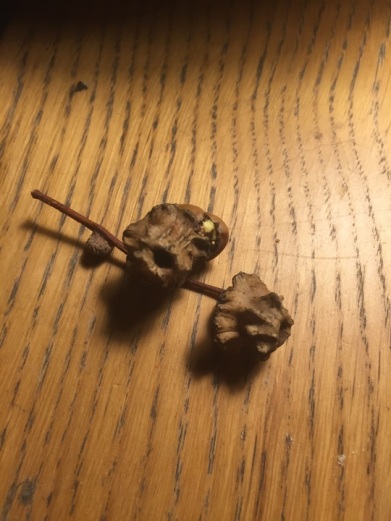 A new one to me was found and posted recently by Lord Aodh They look absolutely alien and are created by the Acorn or Knopper gall wasp (Andricus quercuscalicis).  This one is definitely not period for Ireland or Britain as they were only introduced during the 1970s.  This gall wasp lays eggs in the developing acorns of Quercus robur. Apparently it is a fool proof way of identifying the oak, as it will only happen in the robur species.  Instead of the normal acorn complete with little hat/cup and nut, the acorn is converted into a ridged woody lump.  It starts out yellowish green and sticky.  This is definitely an invader and raises more concern than the harmless to the host tree galls previously described, but only in so far as it causes damage to individual acorns.  There are other invaders also becoming more established in Ireland, but I think this one is the most dramatic looking.

I’ve just discovered this: http://www.nhm.ac.uk/resources/research-curation/projects/chalcidoids/pdf_X/Willia2010.pdf and want to read it next, but right now it is late and I am very tired.    So I’ll finish for now with a To be continued…..